Capitalization & Items in a Series with Alice in Wonderland (Punctuation Puzzle) 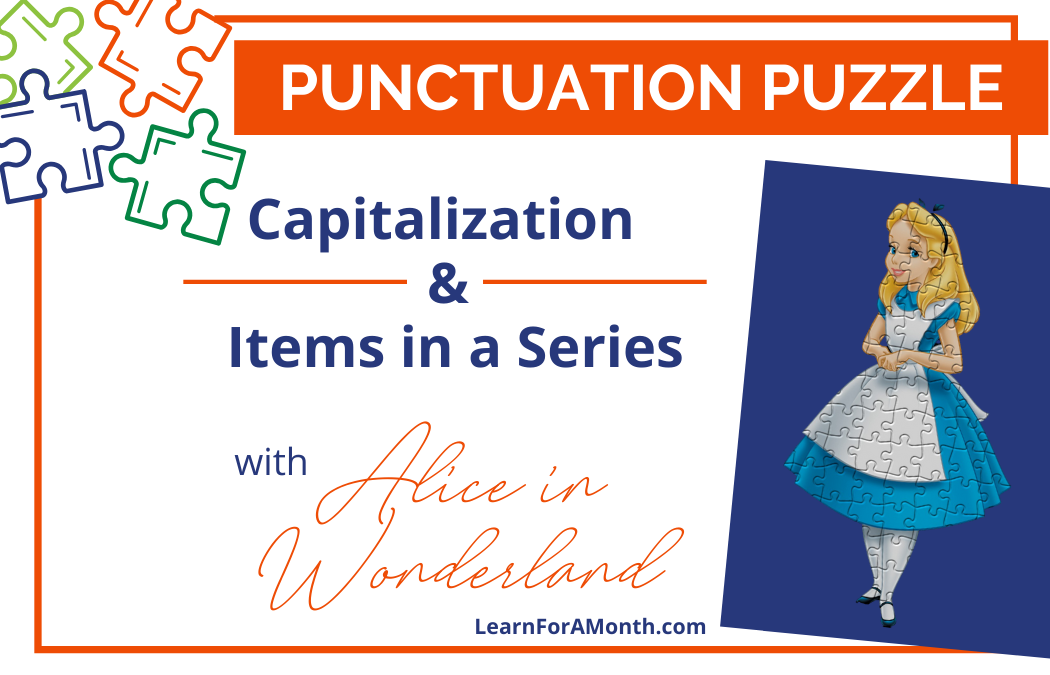 This week’s Punctuation Puzzle has to do with capitalizing references to people and commas with a series of three or more. The latter causes much confusion (and is covered, in part, in a recent LL slideshow, “5 Tips for Coordinating Conjunctions”). Moreover, the series of three or more is further confused with the great Oxford Comma debate.

The Oxford (or serial) comma is the final comma found in a list of things–just before the AND or OR:

She wrote her outline, her story, and her report.

I hope to be there by two, three, or four.

Most people consider the Oxford Comma to be a stylistic issue. That is, you either do it all the time (your own style) or you don’t….unless, of course, the style guide that your teacher assigns subscribes to using it or not using it, in which case, you would follow that stylistic protocol. (For example, AP style does not require use of the Oxford Comma.)

I teach the use of the Oxford Comma when I teach the writing of a series of three or more (whether those items in the series are nouns, verbs, prepositional phrases, describers–whatever) because it solves the clarity problems that sometimes arise without the use of it.

For example, without the Oxford Comma, this sentence is confusing:

I love my grandparents, Mickey and Minnie.

Does this person love their grandparents? Or do they love three sets? Are Mickey and Minnie the names of the grandparents?

Students won’t have to try to rearrange that sentence if the Oxford Comma is always used: I love my grandparents, Mickey, and Minnie.

Zac does a great job explaining some confusing usage issues in this week’s puzzle! Happy Puzzling!

Punctuation Puzzle – Capitalization & Items in a Series With Alice in Wonderland

Alice spotted a duchess, a cook and a grinning cat. She quickly learned that they were the duchess, the cook and the cheshire cat.

Alice spotted a duchess, a cook, and a grinning cat. She quickly learned that they were the Duchess, the Cook, and the Cheshire Cat.

1. Capitalization can be tricky, and that is the case in our sentence. However, if we break it down, we will see that there are rules that can help us make sense of capitalization.

2. The main rule of capitalization is this: capitalize all first, last, and important words in proper nouns. This includes the names of people, groups, God, books, documents, geographic features, manmade items, buildings, states, streets, and countries.

Alice, French, Savior, The Hobbit, the Declaration of Independence, the Atlantic Ocean, the Lincoln Memorial

3. However, sometimes, common nouns—words we would normally not capitalize (because they are not proper nouns)—are used in ways that make them proper nouns. This means they need to be capitalized. There are several instances where this can occur. Let’s check out one of them before we look at our problem sentence.

4.a  If a word is used in place of a person’s name and without a noun marker or article, that word must be capitalized because it is being used as a proper noun.

Then, Mother told us it was time for lunch. (We capitalize mother here because we could use Donna instead, and the sentence would still make sense.)

4.b  If the sentence was Then, my mother told us it was time for lunch, we would not capitalize mother. This is because my is a noun marker, and it would not work to say my Donna.

6. In our case, though, we are not dealing with this type of common noun-proper noun situation. Instead, we have a case where common nouns are being used to refer to specific people; therefore, they turn into proper nouns and must be capitalized.

She quickly learned that they were the duchess, the cook, and the cheshire cat.

7. These words, duchess, cook, and cat, are normally common nouns because they do not refer to a specific duchess, cook, or cat. This is why the capitalization in our first problem sentence is correct (Alice spotted a duchess, a cook and a grinning cat.) These words are not referring to the names of characters here.

8. In the case of the second problem sentence, though, these words are actually the names of characters (The Duchess, the Cook, and the Cheshire Cat); therefore, they need to be capitalized.

She quickly learned that they were the Duchess, the Cook, and the Cheshire Cat.

NOTE: We capitalize both Cheshire and Cat here because they are the first and last words in a proper noun (see point 2 above)

Items in a Series

1. The other problem in our sentences has to do with using commas to separate items in a series.

2. The one rule to solve this problem is be sure to put a comma before the and at the end of the series.

Alice saw the White Rabbit, the Mad Hatter, and the Dormouse.

4. In the case of our problems sentences, we need to add a comma before the and in both sentences:

Alice spotted a duchess, a cook, and a grinning cat. She quickly learned that they were the Duchess, the Cook, and the Cheshire Cat.