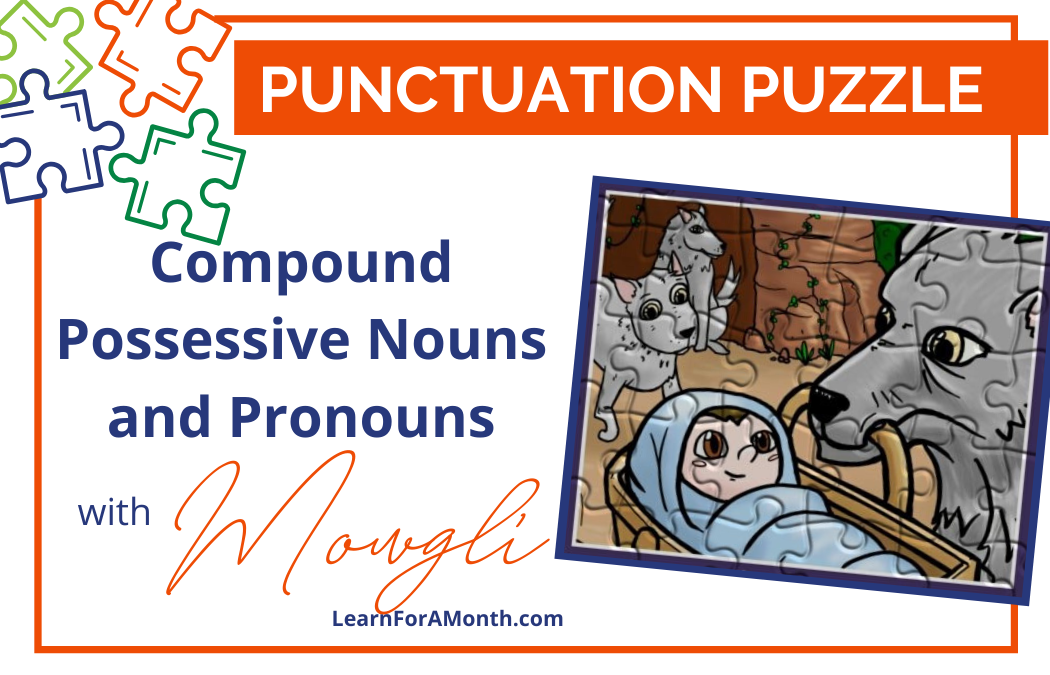 Compound possessives! They are incredibly tricky! Zac does a great job teaching them in this week’s Punctuation Puzzle, but I am going to give you three “Tricky Tricks to Help It Stick” right up front about possessives (a little cheat sheet before the test!):

1) When two nouns possess the same thing, only the noun closest to the “possessed” object needs to show possession.

2) When a noun and pronoun both possess something, use a possessive pronoun and show possession to the noun (both).

But the most important tricky trick of all is one that is taught incorrectly in many sources and handbooks.

I see this mangled so many times. And I have students who come to my classes sure that they understand the rule (and quote it verbatim): If a word is plural, put S’ (childrens’ ???). WRONG.

What about these plurals:

The real rule here is completely based on what the word ends with (not on its singular or plural state)!

If a word you want to show possession to does not end in an s, put an apostrophe s:

Zac takes us into even more detail this week with compound possessives. For more details, try to solve this week’s puzzle and check out the explanations!

1. Our punctuation puzzle today deals with a topic that sounds complicated, compound possessive nouns and pronouns. However, let’s work through these terms, and we’ll be able to understand it.

2. Let’s start with understanding the two simplest parts of this term: nouns and pronouns. Nouns, along with verbs, are the building blocks of sentences. A noun is a person, place, thing, or idea (Mowgli, jungle, leaf, loyalty).

3. Pronouns, as you might guess, have something to do with nouns. A pronoun is a word that takes the place of a noun (I, you, his, hers, them). Donna likes to tell students that pro means FOR….so a pronoun is FOR a noun….it is in place of it.

ii. As you can see in the examples, an apostrophe and an s or a simple apostrophe announce that a normal noun is now a possessive noun.

iii. Pronouns can be possessive, just like nouns, but they do not use apostrophes to show this. Instead, they either remain the same, take on a different form, or use a simple s.

Her den (the same – do you know her? [not possessive], her den [possessive])

My prey (different form – my instead of I)

Is that hers? (a simple s – hers instead of her)

ii. Now this example brings up a question: why do we use Baloo instead of Baloo’s? After all, Baloo’s is the possessive form of the noun Baloo, isn’t it? The answer to this question is the key to fixing our problem sentence.

iv. In this case, we are not discussing strengths (plural); we are talking about strength (singular). Thus, we do not need an apostrophe and an s after Baloo. They are sharing the strength, as opposed to them each owning something separately.

v. When we use possessive nouns with a plural item, we do use an apostrophe and an s:

vi. Bagheera and Mother Wolf each made a different promise of assistance; therefore, in our sentence, we need to an apostrophe and an s after each of them.

8. First, we see that that the pronoun Their’s has an apostrophe. No pronoun can ever have an apostrophe. So, we change the word to theirs. However, does Theirs motives make sense? No, instead, we should have Their.

9. Second, let’s look at the wolves’ and Shere Khan’s wish. Is this phrase punctuated correctly? No, it is not. Is wish singular or plural? It is singular; therefore, wolves does not need an apostrophe after it. They are all sharing the wish.

10. That leaves us with our final sentence: