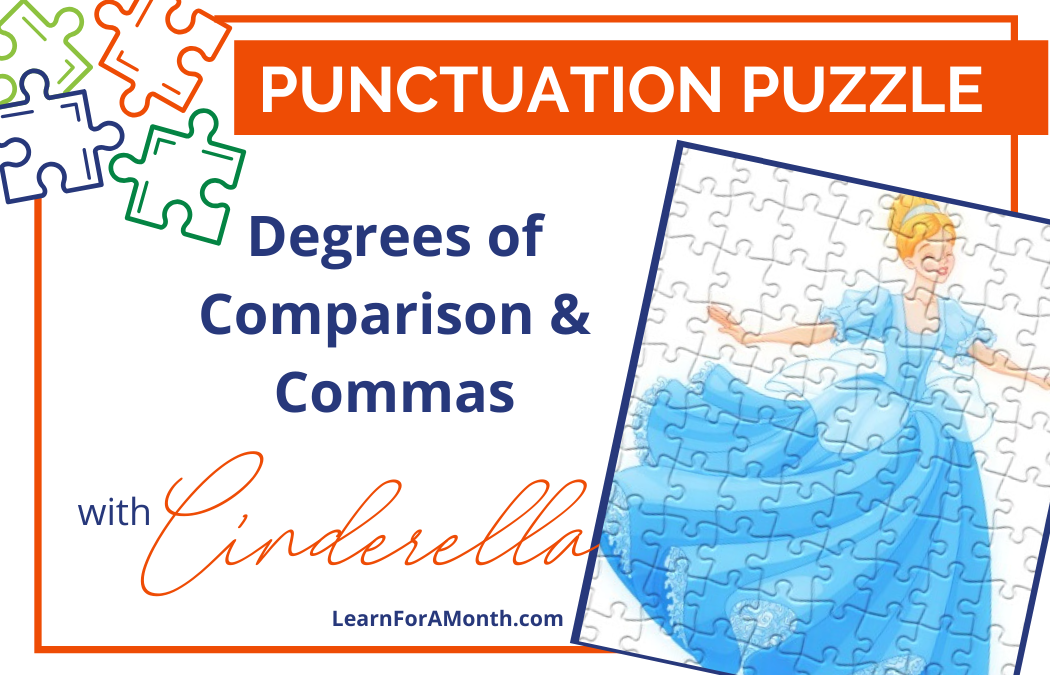 Two of my least favorite things to teach: direct/indirect objects (and predicate nominatives) AND degrees of comparison. (Okay, maybe that is like my four least favorite things to teach!) The first ones (direct/indirect/pn) are just soooo complicated (and they can’t just be skipped or I end up with students who write She gave Sara, Joe, and he a letter….agghh…..). And the latter—degrees of comparison—soooo subjective and vague! Poor students!

With degrees of comparison, we start out telling students in simple form that when you compare two things, use comparative (more, better, worse, etc.), but when you compare more than two things, use superlative (most, best, worst, etc.). Then we ask them to compare two GROUPS—they are more cheerful than the last class— (um, is that two or many people?) and then one thing to the entire world—he is the kindest of all (um…that sort of seems like two things!). Seriously? Vague. Subjective. Tricky!

My writing assistant, Zac Kieser, does a great job of explaining it below…so read on if you are as frustrated teaching this concept as I often am! 🙂

Out of all the fabulously-dressed guests, Cinderella, was the more beautiful person in the room.

Out of all the fabulously-dressed guests, Cinderella was the most beautiful person in the room.

1. Our first problem has to do with commas. To begin with, let’s consider the purpose of commas. We can sum up how commas are used with this statement: Commas show a pause in a sentence. Specifically, place a comma where you hear a pause. For example,

The fairy godmother using the pumpkin created a beautiful carriage for Cinderella.

The fairy godmother, using the pumpkin, created a beautiful carriage for Cinderella.

2. If you read the first sentence out loud, you can see that the sentence pauses after the words godmother and pumpkin. So, we place a comma after each of those words when we write the sentence out.

Out of all the fabulously-dressed guests, Cinderella was the more beautiful person in the room.

There is no pause between Cinderella and was, so no comma is needed. (Plus, we have already taught our students over and over and over again that you do not place a comma between a subject and its verb (unless the subject has an appositive between it and the verb: Cinderella, the one with the glass slippers, was beautiful.).

B. Degrees of Comparison

2. Positive adjectives are “typical” adjectives; they describe a noun or pronoun. They answer questions like What kind of object this? Which object is this? and How many of this object are there? For example,

Cinderella was kinder than her stepmother.

Kinder compares Cinderella to her stepmother and tells us who had more kindness.

i. When a word is three syllables or more (more beautiful), use more instead of adding –er.

ii. When a word sounds awkward with er added to it (honester), use more instead of adding –er.

7. Like more, most is used to make an adjective superlative if the adjective has three syllables or more or sounds awkward when –est is added.

9. Now let’s return to our sentence: Out of all the fabulously-dressed guests, Cinderella was the more beautiful person in the room. In this sentence, we see Cinderella being compared to the other people in the room. How many people is she being compared to? We can safely assume it’s more than two, so we need to use a superlative adjective. Most beautiful of all—superlative!

10. Is more beautiful a superlative adjective? No, it is not; it should be replaced with most beautiful. And that gives us our final sentence:

Out of all the fabulously-dressed guests, Cinderella was the most beautiful person in the room.

Today’s Punctuation Puzzle sentence comes from a student writing assignment found in the Cinderella Twice-Told Tale writing book from the Really Writing downloadable series. This single-project book is available for individual or classroom use in November 2017. This Puzzle was written by Zac Kieser and Donna Reish.