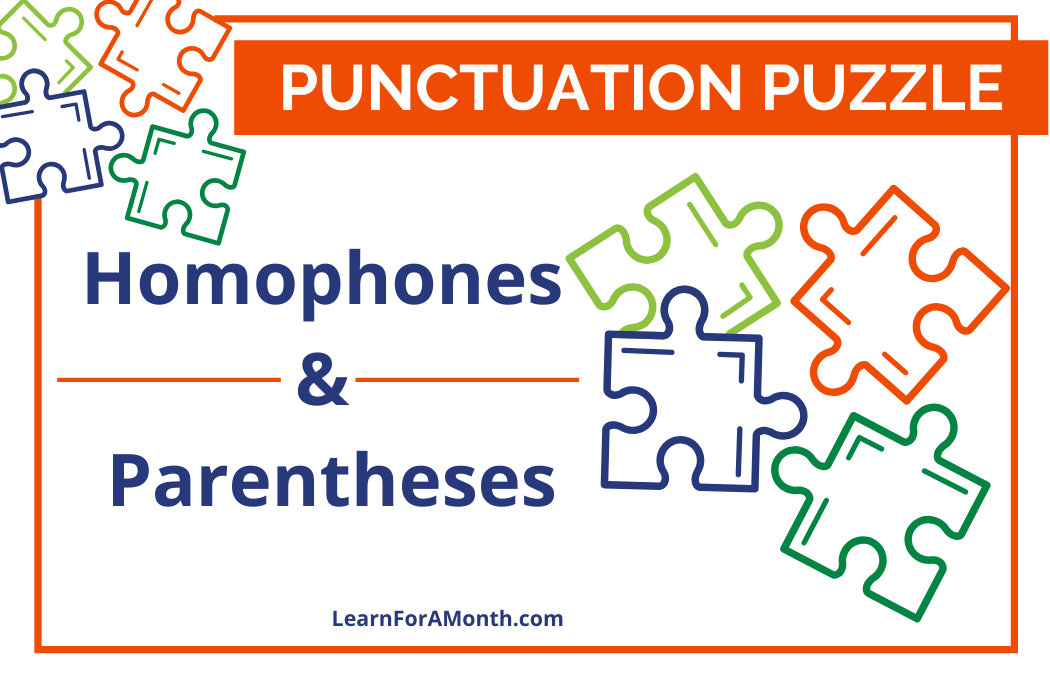 So how can I relate homophones with parentheses (outside of today’s Punctuation Puzzle, which contains both)? All good teachers can make a relationship, comparison, analogy, picture, etc., out of everything. Right? 🙂

So the word parentheses itself can be considered a type of homophone. Now granted, if a person says each of these two words slowly and clearly, they are not true homophones, but most of us do not do that:

I’m embarrassed to admit that I was a full grown adult (almost a grandma) who had written a several curriculum books before I truly learned to differentiate between these two almost-homophones. (The topic just eluded me….not alluded me…don’t get me started on homophones, please!)

So to keep you from suffering the same embarrassment that I did, I am going to give you a “Tricky Trick to Help It Stick”!

See? Parentheses really do have something to do with homophones!

Mulan decided she wood steel her father’s armor (She new where it was.) and take his place.

Mulan decided she would steal her father’s armor (she knew where it was) and take his place.

1. This sentence has a sizeable number of errors in it, but most of them are related to words called homophones.

Homophones are sets of two or more words that sound the same but are spelled differently. We have already discussed several sets of homophones in previous Punctuation Puzzles.

Donna’s Note: I tell students that homo means same and phone means hear…so homophones sound the same when you hear them! 🙂 Tricky trick!!!

2. Wood/Would – let’s begin by defining each of these words. Wood is a noun that means substance of a tree. Would, however, is a verb meaning to express a sense of will. Let’s observe these words in sentences:

They could not break the strong wood of the Emperor’s palace gates.

Mulan would save China, whether people believed her or not.

So, in our problem sentence, should we use wood or would? Yes, we should use would.

Mulan decided she would steel her father’s armor (She new where it was.) and take his place.

3. Steel/Steal – what are these words definitions? Well, steel is a noun meaning an alloy of iron with carbon. Steal, meanwhile, is a verb that means to take something without permission. Check out these two example sentences:

Again, which word should we use? The correct answer is steal.

Mulan decided she would steal her father’s armor (She new where it was.) and take his place.

4. New/Knew – once again, let’s first define our words. New is an adjective that means recently made. Knew, on the other hand, is a verb that is the past tense of the verb know. Let’s see examples of these words being used properly,

The new army was the only force standing between the Huns and China’s capital.

Mulan knew what she had to do to save China.

We can see here that knew is the word we should use in our problem sentence.

Mulan decided she would steal her father’s armor (She new where it was.) and take his place.

1. The second set of errors in this sentence has to do with parentheses. Parentheses are punctuation marks which set aside words that offer additional information but do not need to be emphasized. This is in contrast to commas which emphasize words and dashes which strongly emphasize words. For example,

Terror struck Mulan (the Huns were not all dead)!

Terror struck Mulan—the Huns were not all dead!

2. Would we want to use parentheses or dashes here? If you chose dashes, you would be correct. It is certainly important that the Huns were not all dead! Therefore, we want to strongly emphasize that fact, not de-emphasize it with parentheses.

3. Now, there are 3 important rules regarding parentheses.

First, do not capitalize the first word of the group of words in parentheses if the parentheses is not at the end of a sentence. The only exception is a proper noun or a quote. Let’s check out some example sentences,

At first, the guard thought he was seeing a cloud (no Hun soldiers had been seen for several weeks), but then, with terror, he realized it was the Hun army!

At first, the guard thought he was seeing a cloud (Hun soldiers had not been seen for several weeks), but then, with terror, he realized it was the Hun army!

4. The second parentheses rule is do not use a period before the closing parentheses–again, if it is not at the end of a sentence or if it is at the end but is not a complete sentence. For example,

As Mulan had suspected, everyone was innocently celebrating (streamers, lanterns, and people everywhere). Does fall at the end of the sentence–but is not a complete sentence inside the parentheses.

Mulan had a weapon (she could keep it since it was her father’s), but she needed more help. Is a complete sentence inside the parentheses but does not fall at the end of the sentence.

Mulan had a weapon. (She could keep it since it was her father’s.) However, she needed more help.

a. Since it is a complete sentence by itself that falls at the end of a sentence (not mid-sentence), treat it like a sentence on its own.

b. That is, the punctuation and capitalization of the sentence will be just as though it were a sentence by itself–and will all be inside the closing parenthesis.

5. Applying these rules to our problem sentence, we end up with our completely corrected sentence:

Mulan decided she would steal her father’s armor (she knew where it was) and take his place.