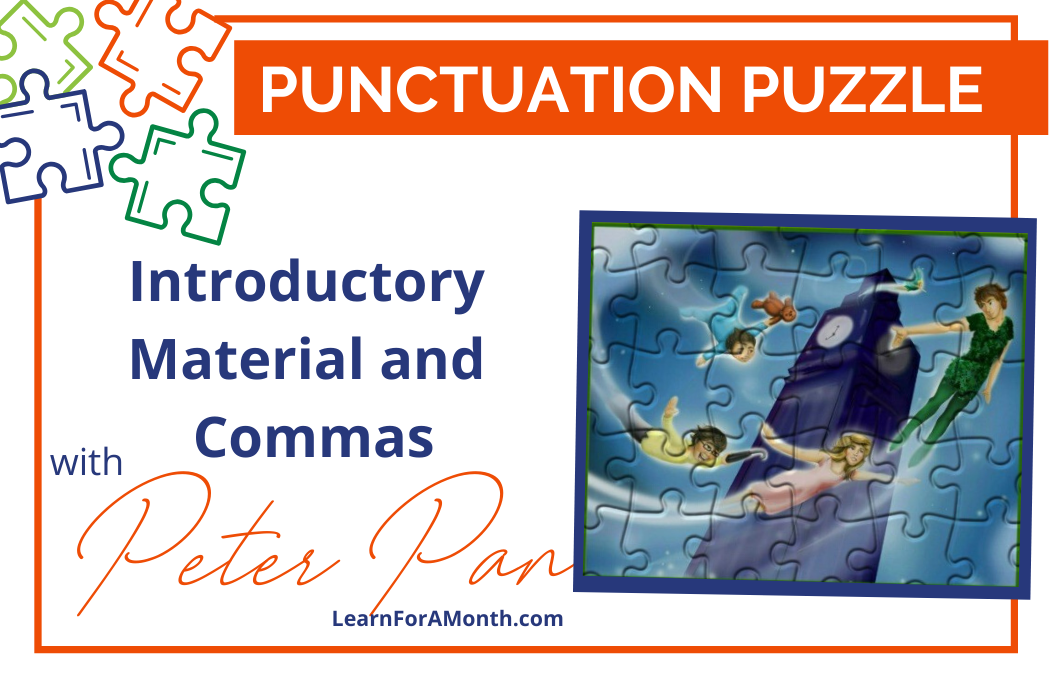 Amazing Punctuation Puzzle this week! And not just because it is about a favorite attraction of mine at Disney World. (Btw, 267 days til our next family Disney trip!) Zac does an amazing job explaining sentence openers and comma use……but here is a Teacher Tip that I have been facing a lot lately: Students will never get a good handle on sentence openers (also called introductory material or non-essential information at the beginning of a sentence) UNTIL they have a handle on what a sentence contains.

In other words, they have to be able to tell the five parts of a sentence (CAVES–Capital; All Makes Sense; Verb; End Mark; Subject) before they can truly find and punctuate their sentence openers properly.

Here are some tips on working with students concerning base sentences and sentence openers:

1) Cover up all sentence openers with fingers. Say the “sentence” that remains aloud. Talk through the parts of a sentence. How can they know that a real sentence remains? It has to have a subject and verb. It has to make sense when it stands all alone.

4) Work extensively on sentences that do not have sentence openers, helping students get a handle on what a real sentence (without an opener) looks like.

6) Make it a habit of isolating sentence openers when dissecting sentences. I use the following protocol:

a. Place parentheses around all prepositional phrases.
b. Place brackets around all subordinate clause openers.
c. Place “less than/greater than” (<>) around all other openers

8) Practice orally with the “Sentence/No Sentence” game. You say groups of words and have the tell you whether they are sentences or not and why.

Now on to our Puzzle…

Having defeated Captain Hook Peter Pan tried to convince the children to stay in Neverland. However they were homesick and ready to return home.

Having defeated Captain Hook, Peter Pan tried to convince the children to stay in Neverland. However, they were homesick and ready to return home.

1. In this problem sentence, we have two problems, both of which have to do with introductory material and commas.

2. Commas have an incredible variety of uses; however, they are most often used following a number of different kinds of introductory material (sentence openers).

3. Let’s check out these various types of introductory material that use commas:

i. A subordinate clause opener – Because he was clever, Peter Pan was always able to defeat Captain Hook.

iii. An ing opener – Using his voice, Peter caused the pirates to start fighting each other.

v. A short PP (prepositional phrase) that requires a comma – At night, Peter Pan and the Lost Boy slept in their hideout.

(A short PP requires a comma, if you, the writer, can hear a pause after the prepositional phrase. If someone else hears a pause, but you do not hear it, it is fine not to insert a comma.)

vi. A transition word or phrase – Then, Peter helped his friends escape from Captain Hook.

vii. An ly word (adverb) – Fortunately, Wendy was unhurt by the arrow.

viii. An ly phrase or clause followed by a comma – Quickly tying up everyone, Captain Hook and his men prevented Peter from learning of his friends’ plight.

ix. A conjunctive adverb – However, the pirates had learned where Peter and the Lost Boys lived.

xi. Other non-essential material of your choice – Ready with a plan, Peter Pan could always discover how to escape from Captain Hook.

4. There are two rules to remember when we use commas with introductory material:

i. Introductory Material and Commas Rule #1

A pause following any kind of introductory material means you need to use a comma.

(If we read this sentence, we can hear a pause after the word approaching, at the end of the ing opener, Hearing the crocodile approaching; therefore, we need to insert a comma here.)

A sentence with a true sentence opener can stand alone, even if the opener is removed.

5. In our problem sentence, we have two pieces of introductory material:

Having defeated Captain Hook Peter Pan tried to convince the children to stay in Neverland. However they were homesick and ready to return home.

6. The first piece of introductory material is an ing opener and we can hear a pause after it; therefore, it needs a comma.

Having defeated Captain Hook, Peter Pan tried to convince the children to stay in Neverland. However they were homesick and ready to return home.

7. The second piece of introductory material is a conjunctive adverb, so even though it is debatable whether it has a pause after it or not, it also needs a comma.

Having defeated Captain Hook, Peter Pan tried to convince the children to stay in Neverland. However, they were homesick and ready to return home.