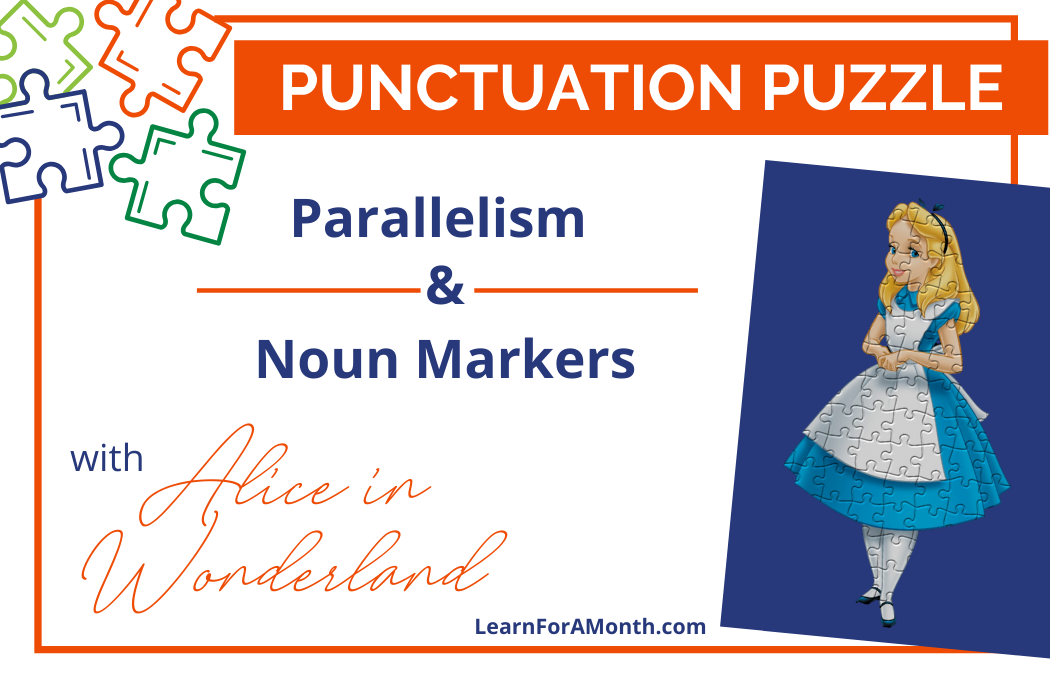 Parallelism. Some days I can’t even spell it, much less explain it really well. Some grammar concepts are like that. They seem out of reach…until you get a really great example, like today’s Alice in Wonderland Punctuation Puzzle sentence. The moral of this paragraph:

1) Get a quick spelling trick for this word (like my “1-2-1”—one r; two l’s; one l) or learn to syllabicate really well: par/al/lel/ism—and remember that you divide between double consonants.

That is what we are doing today….so here you go:

As Alice watched, the white rabbit pulled a watch out of his coat pocket, he glared at it, and leapt into an hole.

As Alice watched, the white rabbit pulled a watch out of his coat pocket, glared at it, and leapt into a hole.

The first problem we can spot in this sentence concerns the three phrases at the end of this sentence: pulled a watch out of his coat pocket, he glared at it, and leapt into an hole.

1. To fix this error, we need to discuss a concept called parallelism.

a. Parallelism can be defined as “the use of successive verbal constructions in poetry or prose that correspond in grammatical structure….”

b. Let’s discover what that definition means.

i. First, a successive verbal construction is a fancy phrase for either a pair or a list of three or more items.

ii. It could be something as simple as caterpillar, cat, and queen or as complex as infuriated a caterpillar, talked with a cat, and angered a queen.

c. The definition then says that the “successive verbal constructions” must “correspond in grammatical structure.” This could be simplified to say that the words or phrases in a list must remain consistent with each other.

e. A few examples might help explain this further:

Alice infuriated a caterpillar, talked with a cat, and Alice angered a queen.

i. Is this sentence parallel?

a) Let’s check by removing all the other phrases except “infuriated a caterpillar.”

b) What happens when we place that with the first part of the sentence: Alice infuriated a caterpillar.

c) That makes sense, but let’s try the next one.

b) Since that works, we have just one more phrase to test.

iv. Let’s change the sentence to Alice infuriated a caterpillar, talked with a cat, and angered a queen. Does this new wording work? Let’s try it: Alice angered a queen. It certainly does, so our phrases are parallel!

4. After changing “he glared at it” to “glared at it,” let’s apply our test again: As Alice watched, the white rabbit glared at it. That makes sense!

The second and final problem in this sentence involves noun markers, also known as articles.

1. Articles are three extremely common adjectives—a, an, and the.

2. They usually come before nouns in the English language and tell which one.

Some handbooks call these noun markers because they mark a noun. That is, they tell you that a noun is coming.

Some call them articles, but there is nothing there for students to relate to, so I use both terms.

Some call them adjectives, but let’s just not….. 😉

When I call them noun markers, I tell students that they mark an upcoming noun. The noun could be right way (the apple), or it could be after some describers (adjectives), such as in the juice, crispy apple.

5. The reason these words are in the “wrong” place is because words are placed with a or an based on their starting sound, not their beginning letter.

a. “Unicycle” starts with a y sound so a is placed before it

b. “Hour” starts with an ow or o sound so an is placed before it.

6. Applying what we have discussed to our sentence, is an hole correct? At first glance, it might seem correct, but what sound does hole start with? It begins with a wh or w sound which is a consonant sound. That means a should be placed before it.

Bringing everything together, the correct sentence is:

As Alice watched, the white rabbit pulled a watch out of his coat pocket, glared at it, and leapt* into a hole.

*Leaped would also be a correct past tense of the verb leap; leaped and leapt are both acceptable.

Today’s Punctuation Puzzle sentence comes from a student writing assignment found in the Alice in Wonderland Twice-Told Tale downloadable writing product coming out this fall of 2017. This Punctuation Puzzle was written by Zac Kieser and Donna Reish.

P.S. What Punctuation Puzzles have stumped you lately? We can elaborate on those concepts in upcoming ones if you let us know!