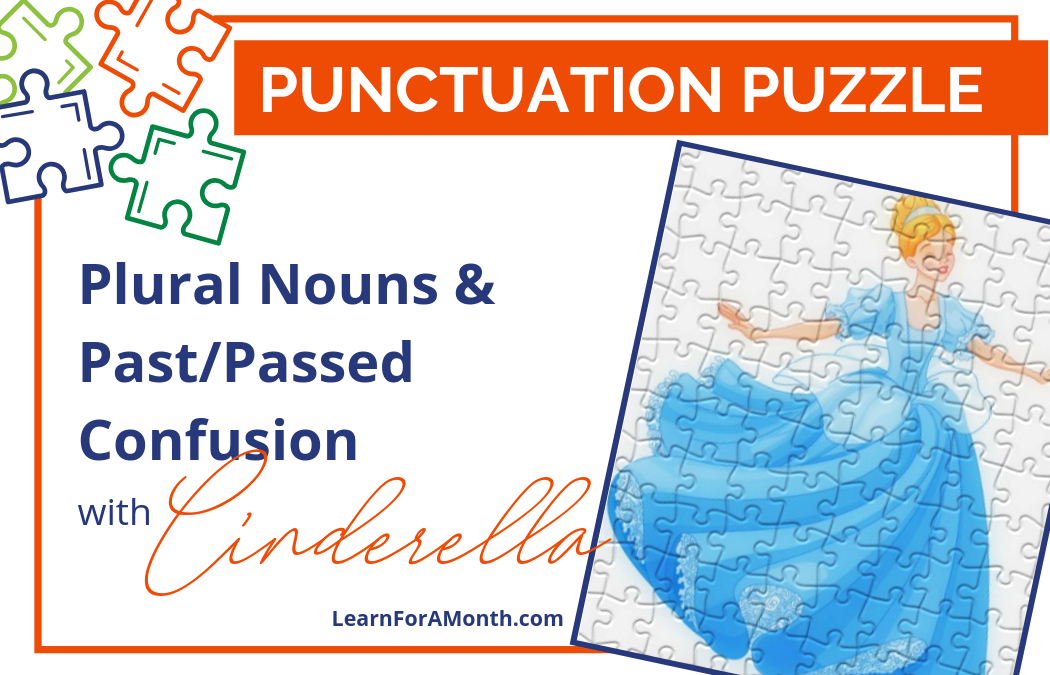 He passed the test or He past the test? Go passed the house or Go past the house? Passed and past are super confusing–as evidenced in social media every where. It’s not just students who have trouble with this confusing word pair!

2) Next, I ask them if we were trying to make PAST the verb, what would happen to it if we added an ED to make it past tense (no pun intended!). I love doing this because they look at each other and say aloud what it could be: PASS-TED? Then I tell them to write PAST on their paper and add ED to it. In unison, they say PAY/STED! This further cements the fact that PAST is NOT the verb! PAST with ED has nothing to do with PASSING—it has to do with PASTING–as in gluing….PASTED!

5) Another trick I use is to point out that PAST ends with a T….. and THE begins with a T. Then I write on my board (or have them highlight it in their lesson where it is written): pasT The barn; pasT The school; pasT The park, etc. This further cements the fact that past is the preposition, not the verb.

6) I also re- remind (is that a thing?) students that a verb is made past tense with ED added, not T….so PASSED will always be the past tense verb and PAST will never be a verb.

7) For older kids, I give examples of all of the parts of speech that PAST can be–again pointing out that it is never PASS in these instances since PASS is a verb:

a. Preposition: They drove PAST the gate
b. Adjective: He is the PAST president.
c. Adverb: He flew PAST.
d. Noun: Let’s leave that in the PAST.

So there you have it–some tricks, some tips….and you are ready to solve Zac’s Punctuation Puzzle below…with our favorite peasant girl, Cinderella!

1. We have a total of five problems in our example sentences, but three of them deal with plural nouns. Plural nouns are nouns that show more than one person, place, thing, or idea.

2. Plural nouns are tricky because the form of the noun has to be changed in a different way depending on the noun.

3. Let’s check out some of the different ways nouns are made plural:

ii. Some nouns do not change at all: deer—deer, fish—fish

b. Change the y to I and add es when the word ends in a consonant + y: sky—skies

a. Add es to a word ending in a consonant + o (as long as it is not a music related word): potato—potatoes

b. Add s to a word ending in a vowel + o: patio—patios

c. Add s to any word that ends in o and is a music word: soprano–sopranos

vi. Change the f to v and add es for most nouns that end in f

vii. If none of these rules apply, just add s to the word

4. Now, let’s apply these rules to our sentences:

6. The word guard is a singular noun that does not fall under any of these rules (vii.), so we only add s, leaving us with guards

7. The word women is a plural noun, but we are only talking about one woman (Cinderella). So, we need to change this to its singular form. Women falls under i., meaning its spelling changes. The spelling change for women to move it to singular is woman

1. Our two other problems in the sentence are a result of confusion between the words passed and past. These words are homophones, meaning they sound the same, but they are spelled differently and mean different things.

2. Passed is a form of the verb pass, and it is used to show two actions:

i. When a subject has succeeded in something: He passed the test.

ii. When a subject moves around something: She passed the house.

3. Past is an adverb that means by or beside or a preposition that shows where something is in relation to something else.

Her house was just past the city gate. (past is used as a preposition.)

He sprinted past the house. (past is used as an adverb).

4. Now, in our sentences, in the first case we have Cinderella ran passed the palace gates and into the forest. Here, passed needs to be changed to past since we are talking where Cinderella was running in relation to the palace gates. That is what the word past does.

5. In our second case, only a poor peasant woman had past through the palace gates, we are describing Cinderella’s action, not where she is in relation to the gates. Therefore, we need to change past to passed.

6. So, our final sentence reads…