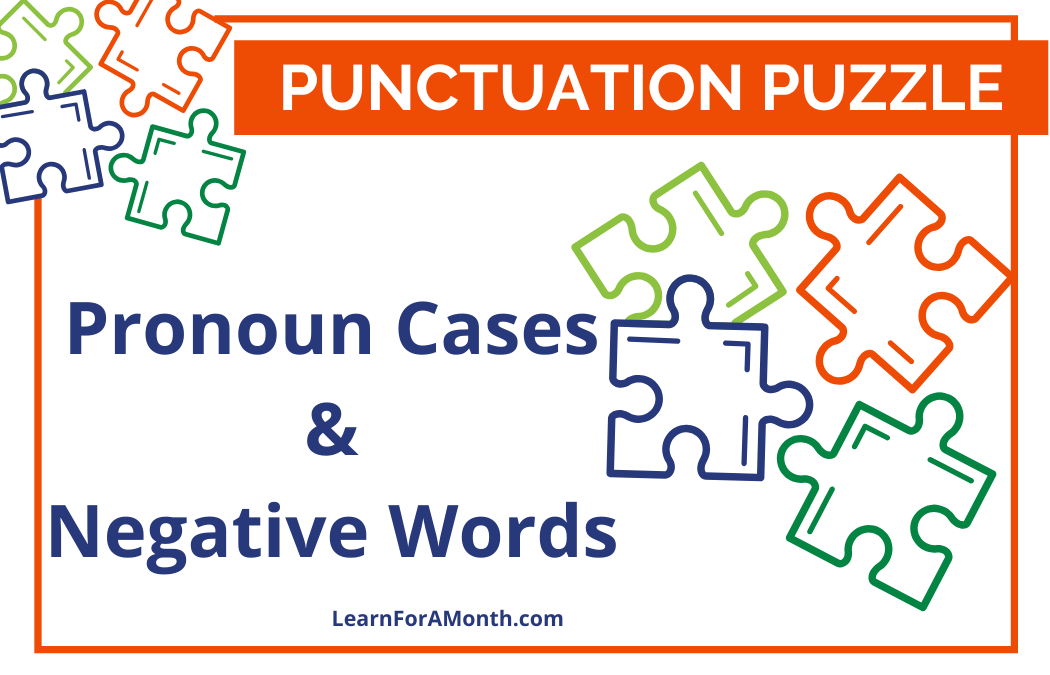 Subjective. Objective. Big words (as many grammar terms are—adjectival clause or appositive, anyone?) to teach to young student. And yet, even young students need to know when to use he and him—less they end up saying, “Him took my toy” into adulthood! Like everything else I teach, I start out with what students already know. (I even say to them repeatedly, “You know more than you think you know!” Then I proceed to have them tell me what they DO know about the topic.)

In the case of subjective and objective, my kids can usually tell me, sometimes with a little prodding, that subjective has the word SUBJECT in it and thus, has something to do with the subject part of a sentence. And objective has the word object in it—and they know that prepositional phrases have objects at the end of them. (Check out my Think Fast Grammar Quiz packet here!)

That gets us started discussing how some pronouns should be used as the subjects of sentences and some as objects of phrases, etc. (Of course, we throw in a few outlandish examples that their little siblings might say, “Give it to she” or “Me want it!”)

The point is that all difficult concepts can be broken down, related to something the student already knows, taught incrementally, and explained with memorable examples.

In the meantime, take a stab at this week’s Punctuation Puzzle! Some of it is obvious—but some of it might surprise you! 🙂

Him and the Ghost of Christmas Present never saw no one with a frown on their face; everyone was merrily chatting and laughing.

He and the Ghost of Christmas Present never saw anyone with a frown on their* face; everyone was merrily chatting and laughing.

*Note: It has recently become acceptable to use THEIR to indicate singular (in addition to plural). This was hard for me to adjust to after nearly twenty years of editing student papers to say “he or she” and “his or her”! I think it is a positive change overall as the alternative to using their for anyone and everyone is laborious.

A. Subjective vs. Objective Pronouns

2. The rule is this: We must use the pronoun case that matches the function of the noun the pronoun is replacing. Let’s dissect this rule.

a. First, every pronoun has two forms or cases: the subjective case and the objective case.

b. For example, she is in the subjective case, while her is the objective case version of she.

4. That sounds pretty confusing, so let’s check out an example:

i. We can see that we should insert pronouns in the second sentence, but should we use the subjective or objective case? The first repeated noun, Scrooge, is the subject in the sentence.

ii. That means we must use the subjective case pronoun he: Scrooge hated Christmas. He thought Christmas was a wasted day.

b. Our second repeated noun, Christmas, is the direct object in this sentence. What case should we use? If you said objective case, you are correct. We need to use the objective case pronoun it. NOTE: Some pronouns like it are identical in both the subjective and objective cases.

5. Returning to our sentence, we see the pronoun him. Him is an objective pronoun. However, is it replacing a subject or a direct object? It is replacing the noun, Scrooge, which, along with the Ghost of Christmas Present, is the subject of the sentence. That means we need to use the subjective case version of him, which is he. That give us:

He and the Ghost of Christmas Present never saw no one with a frown on their face; everyone was merrily chatting and laughing.

1. The second problem in this sentence relates to negative words. Negative words are called negative because they say no or not in some way. They include no, not, never, no one, seldom, and several other words.

Incorrect – I do not have none money.

Correct – I do not have any money.

3. In the incorrect sentence, I mean to say that I do not have any money. However, if you read it carefully, it’s actually saying that I have money—I do not have none money (I don’t have no money, so I must have some money). Double negatives make a situation extremely confusing!

He and the Ghost of Christmas Present never saw anyone with a frown on their face; everyone was merrily chatting and laughing.***

P.S. Do you have any good subjective/objective or double negative teaching tips? I’d love to hear them!