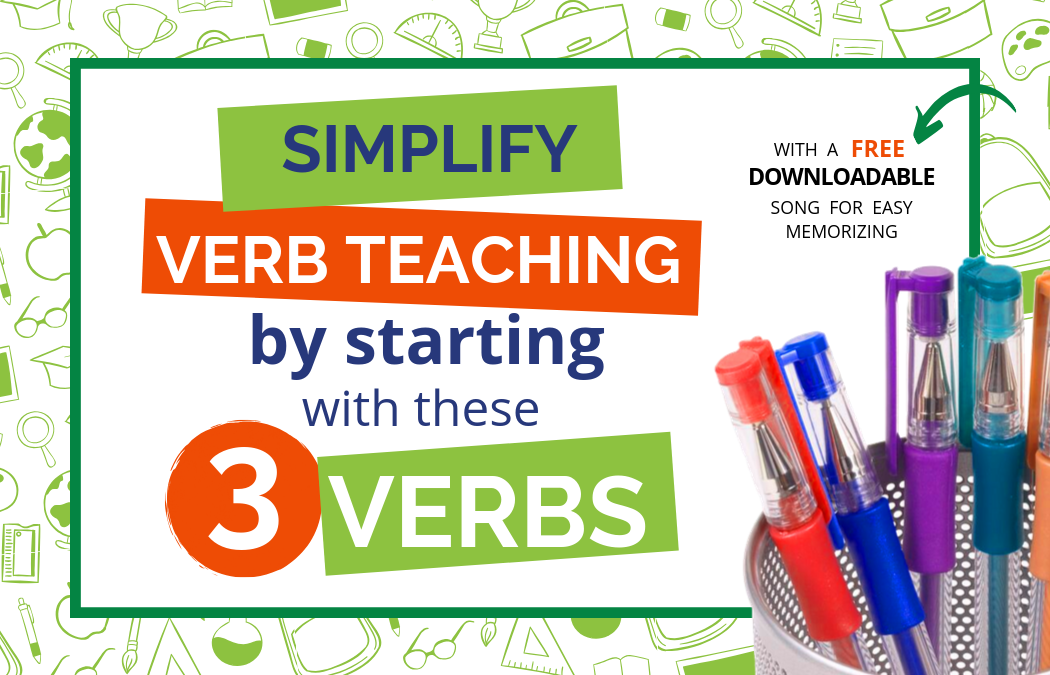 One of the first things that we teach students who are learning to write sentences is that every sentence must have two things: a subject and a verb. (Technically, I teach that a sentence must have FIVE things—CAVES: Capital, All Makes Sense, Verb, End Mark, Subject.)

Action verbs are the forward motion of sentences. They persuade in persuasive writing; inform in research-based writing; and entertain in story writing.

They do all of this in spite of one man, Michel Thaler, who wrote a 233-page French novel in 2004 without using a single verb! (And I would say it also did not contain a single sentence! )

Let’s leave it all….and focus on what will help students write well immediately.

There are three main classes of verbs that I teach in my books:

Obviously, there are various tenses of verbs. And yes, there are verbs that can have objects (i.e. direct objects) and verbs that are not known for having objects. And there are dozens of other ways to categorize verbs.

However, I have found that the best way to teach any grammar skill is to teach it as it relates to writing. After all, we learn grammar for writing and speaking (not to choose the correct answer on a grammar quiz!).

Thus, I focus on action verbs and another group of verbs that we affectionately call Be a Helper, Link verbs—being, helping, and linking verbs all grouped together.

AND….I teach infinitives (to+verb) immediately when teaching prepositions and verbs because students need to know that not every phrase that begins with TO is a prepositional phrase and sometimes TO is the beginning of a verb.

There are many reasons for my method of action verbs in one big category and BHL verbs in another big category, and since many teachers have questioned me through the years, I will give my reasons here—and then introduce you to a simple-as-pie way to learn (or teach your kids/students) all being, helping, and linking verbs in one easy swoop!

ACTION VERBS – Action verbs all have the same characteristics.

BEING, HELPING, LINKING VERBS (BHL) – Being, helping, and linking verbs all have the same characteristics:

To help you remember the Be, a Helper, Link verbs, there is a little rhyme that you can sing to the tune of ABC’s (or “Twinkle, Twinkle, Little Star”).

Download a printable copy of this song for future reference.

(ABCDEFG)
Be, a Helper, Link verbs,

(Now I said my ABC’s)
Can, Could, Shall, Should—they are fun.

I have so much to tell you about learning and teaching verbs—and how to do it well with writing instruction, so stay with me!

In the meantime, I MUST DEPART TO RUN some errands….. I hope you can find all three types there!  ?