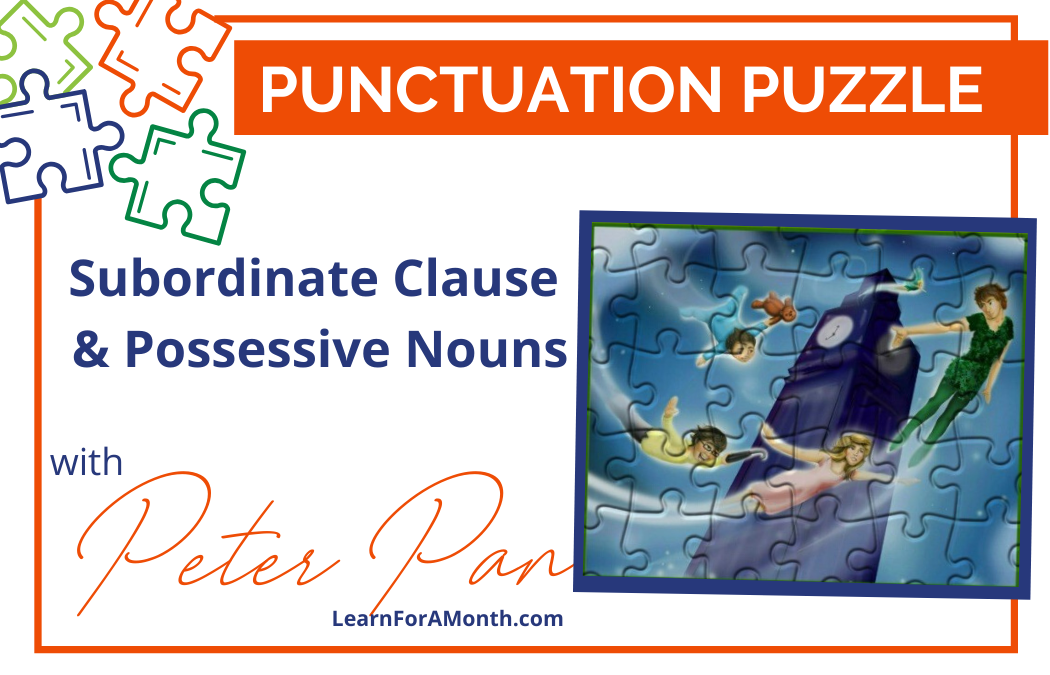 By Zac Kieser and Donna Reish

Welcome to another exciting episode of Punctuation Puzzle! 🙂 I am having so much fun creating these with my writing assistant, Zac Kieser. Grammar and usage can be super confusing—and these puzzles are a great way to learn with the steps and reasons broken down for you. (Kind of like our Editor Duty assignments in Character Quality Language Arts!) Don’t forget to do them with your students—and feel free to forward to a friend who might need a little Language Lady in their life! 😉

Because he had lost his shadow Peter Pan crept back into the Darling’s house. Mr. and Mrs. Darling were away that evening.

Because he had lost his shadow, Peter Pan crept back into the Darlings’ house. Mr. and Mrs. Darling were away that evening.

Now what concepts are behind this answer?

The first change I made in the sentence was placing a comma after the subordinate clause opener, Because he had lost his shadow. Now why did I do that?

a. Let’s start with a definition.

i. First, what is a subordinate clause? It is a group of words that begins with a subordinator and has a subject and verb following it.

iii. Yes, just like prepositions, subordinators are difficult to define!

iv. However, a simple way to test if a word is a subordinator is by using this check sentence: ____________ the submarine went down, we could no longer/still see it. If a word makes sense in this sentence (as long as it’s not an adverb), it is most likely a subordinator. Now, let’s test some words in our check sentence:

Because the submarine went down, we could no longer see it. (Makes sense, subordinator).

Though the submarine went down, we could still see it. (Makes sense, subordinator).

To the submarine went down, we could no longer see it. (Does not make sense, not a subordinator).

i. Besides the subordinators, did you notice anything present in all three phrases?

ii. If you noticed that each one has a subject and verb and could be a sentence by itself if it did not have a subordinator, you would be correct.

c. However, a subordinate clause, with a subordinator, is not a sentence (also known as an independent clause—it needs no help).

iii. In the case of subordinate clause openers (they come at the beginning of the sentence), we must always place a comma following them.

i. We know this since we tested because in our check sentence, and it fit.

ii. Also, the clause has a subject and a verb, and it comes at the beginning of the sentence.

iii. Therefore, following our rule, we must place a comma after Because had had lost his shadow.

The second and final change I made in the sentence was replacing the Darling’s with the Darlings’. Let me explain why I did that.

a. In the English language we show possession to nouns and proper nouns using apostrophes.When we add an apostrophe to a noun, we turn it into a possessive noun. If this noun does not end in an s, we add the apostrophe just before the s:

c. In the case of our sentence—… Peter Pan crept back into the Darling’s house–are we dealing with a noun that ends in an s?

ii. However, the second sentence reads, Mr. and Mrs. Darling were away that evening. That tells us we are dealing with more than one Darling (Darlings), meaning we need to place our apostrophe where we would place it for noun that ends in s.

iii. Therefore, we need to change our sentence from Because he had lost his shadow, Peter Pan crept back into the Darling’s house. Mr. and Mrs. Darling were away that evening.

to our final answer:

Because he had lost his shadow, Peter Pan crept back into the Darlings’ house. Mr. and Mrs. Darling were away that evening.

Today’s Punctuation Puzzle material comes from a student writing assignment found in the Write On, Peter Pan books, Levels I through V (the Writing Box lessons, the story retelling lessons, get away from a villain storytelling, favorite character essay, and Twice-Told Tale story writing).  This Punctuation Puzzle was written by Zac Kieser and Donna Reish.